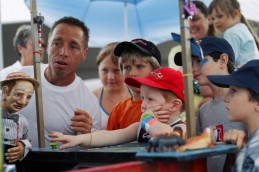 Originally created as a street performance and installation, Quinn Harley’s Dream Factory is part carnival midway act, part game show, all hosted by a puppet named Quinn Harley–tiny master of the midway and ancient trickster clown–where ‘everyone wins a prize’ and a clown is created every minute.

Quinn Harley was designed and built by Erin Macklem of Victoria, BC. 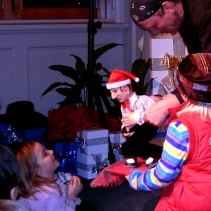 The World’s Smallest Shakespeare Company was born in 2000, incorporating a puppet used in a previous Shakespeare production in Summerland BC (see Direction/Production), audience participation, and a variety of scenes from Shakespeare, including VENUS AND ADONIS, ROMEO AND JULIET, and A MIDSUMMER NIGHT’S DREAM. 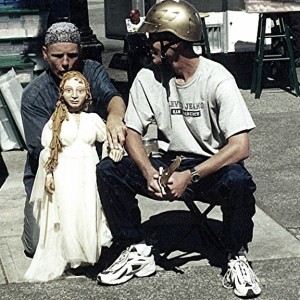 Venus, the Goddess of Love, appears out of a suitcase and chooses audience volunteers to act out various scenes from Shakespeare–volunteers range in age from 12 – 70, male and female.

In VENUS AND ADONIS, the volunteer acts out Adonis’s death scene (killed by the Boar/Jealousy), after which Venus plays her scene of prophesy over the dead body, which is transformed into a flower.  In ROMEO AND JULIET, volunteers help create the balcony for Juliet’s soliloquy.  In MIDSUMMER NIGHT’S DREAM, which can be played in schools and daycare centres, very young volunteers (ages 3-5) are transformed into Titania’s fairy servants(Cobweb, Mustardseed, Peasblossom), and a teacher plays Bottom (in Donkey form), to act out Titania instructing her fairies on how to care for her new Lover.

A very short video, courtesy of two film students who visited Victoria’s Inner Harbour, with music by Winnipeg’s The Ragarmaroons