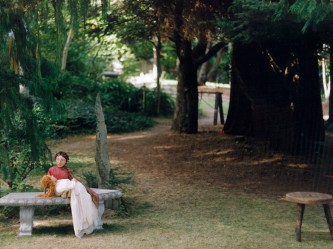 This two-year project was an exploration in adapting the works of Shakespeare to a small cast format, and incorporating puppetry into Shakespeare production. Mark Hellman and Peter Hall spent the first year assembling the text (prepared entirely from First Folio facsimiles), with the objective that no words other than Shakespeare’s would be needed to understand the progression of events.  PASSIONATE LIVES uses Shakespeare’s poem VENUS AND ADONIS, in the form of a puppet show, as a story thread to link together scenes from a variety of Shakespeare plays, to explore how the theme of The Lovers develops:  both in terms of the stages of relationship (courtship, betrothal, marriage, conflict, tragi-comic resolution), and throughout the Complete Works (comedy, tragedy, romance).

The show runs approximately 1hr 45min (plus an intermission), yet has the feel of a complete play, as the worlds of The Lovers and the puppet play eventually merge and form a unified vision of Love in Shakespeare. Video excerpts of Acts I & II:

A complete script is available for production: Contact Mark for details.

“It seems I am leaving the planet forever…”

WAYFARER’S REACH was a project 5 years in the making, beginning with the book, THE HOME PLANET, a collection of photographs of the Earth from space, and monologues of astronauts from over 30 countries, published in 1986.

Artists from a variety of disciplines (theatre, music, dance) and representing the cultural mosaic of Winnipeg in the 1990’s (1st Nation, Afro-Canadian, Phillipino, European) were brought together to build a new vocabulary of performance and image-making, exploring the potential for re-creating the astronaut’s experience in a black box theatre.

A music video with a selection of show imagery.

Go to Resume page for complete history of Direction/Production